Women in Business and the Challenges They Face 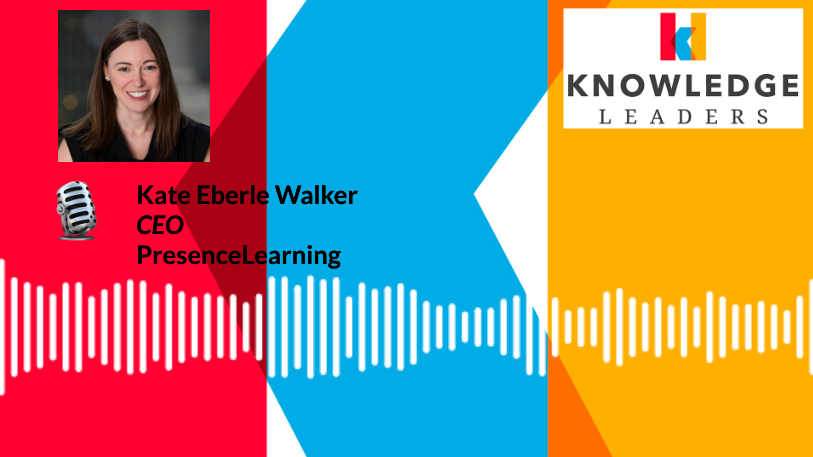 Kate Eberle Walker, CEO at PresenceLearning, joins April Sarraille and Todd Hand of Knowledge Leaders to discuss the challenges women face in business, the things every manager can do to be a better boss for women and how to increase the number of female executives in the education sector.

Todd Hand: Kate, at GSV this year, you gave a presentation on the five simple things every manager can do to be a better boss for women. What are the five things?

Kate Eberle Walker: So those five things are all very simple things–first of all–that every manager can do, and it’s really about understanding where a woman’s coming from, what her perspective is, what she’s going through and then, oftentimes, it’s about doing things that sort of help clear away the noise and the distraction that can come from her trying to fit into a work environment that’s not necessarily built with women in mind, right–so a lot of work environments have more men than women historically and a woman has to sort of adapt herself to fit in and what really good managers do for women is they make it so she doesn’t really have to worry about those things and be thinking about in addition to thinking about her work and focusing on her work thinking about navigating that awkwardness you can have sometimes in trying to fit in where you don’t quite feel like everybody else.

So the five things are first to call her by her name that she introduces herself by, which, in my case….I go by Kate Eberle Walker, my maiden name, and my married name, and I can go into many stories about how many times I’ve had to correct or repeat that to someone, or I’ve had somebody just answer back to me like, “Well that’s a mouthful. I’m just going to call you Kate Walker.”

So, you know, that’s #1 is just giving her the respect that, if she introduces herself in a certain way, that’s what you call her. #2 is talking about it when you take time away from the office as a manager so that she feels less self-conscious. about the times when she needs to prioritize something for herself or for her family, everybody is thinking about how to integrate their lives into their work and how to excel at both and when you talk about the things that you do, especially when you’re taking time away to be with your family, it makes it a lot easier and more confident and comfortable for her to do it.

#3 is respecting meeting times. So start meetings on time, end them on time. There’s a lot of stress particular coming to the end of a work day if a meeting was supposed to start at 5, end at 6, and you started at 5:45. She has to leave, say, to relieve the childcare, which is a very common occurrence…definitely has been for me for a lot of my career. There can be a lot of stress if she’s worried that you’re going to sort of keep that meeting flowing and keep the time flowing when she actually needs to be somewhere else.

Don’t make her ask twice is the next one.

They tend to hear a “no” the first time and feel like it would be too antagonistic or aggressive or unwanted to go back and ask a second time yet that’s what a lot of managers and a lot of executives do is they take the approach of “Well if it’s something they really want, then I’m going to push them to–if they really mean it, then they’re going to ask me twice.

#5 is don’t steal her desk while she’s out on maternity leave. This turns out to be this rampant thing that happens to women again and again where she takes that leave, comes back, it’s a big day to get back into things, and she walks in the first morning and is confronted by someone else having moved in on her space, moved into her office.